Drone footage released by the Lancashire Fire and Rescue Service has revealed the devastating impact of a wildfire in Longridge Fell.

Firefighters are still tackling the blaze involving a tree plantation near Dutton, Preston, after being called at around 2pm yesterday (May 31).

Ten fire engines plus specialist firefighting appliances remain at the scene, where miles of forest have been destroyed.

People are being urged to avoid the area and residents have been advised to stay indoors.

The shocking aerial footage shows flames and smoke billowing from the trees, while a huge part of the woodland floor can be seen charred and smouldering.

A spokesperson for Lancashire Fire and Rescue said that firefighters are expected to be at the scene all day battling the fire.

“Ten fire engines are in attendance at a fire involving a tree plantation on Longridge Fell at Old Clitheroe Road in Dutton, Preston,” they said.

“Firefighters are using water bowsers and jets to bring the fire under control.

“If you’re nearby and affected by smoke, please stay indoors and keep your windows and doors closed.

Lancashire firefighters are also continuing to battle a moorland fire in Darwen, where an additional ten fire engines are still controlling the blaze.

Both fires are thought to have been started by people having barbecues in the area over the weekend.

“Please do not have barbecues or campfires on the moors,” Lancashire Fire and Rescue responded in a social media post.

“The moors are tinder dry and a fire can get out of hand very quickly and become very dangerous,” they said. 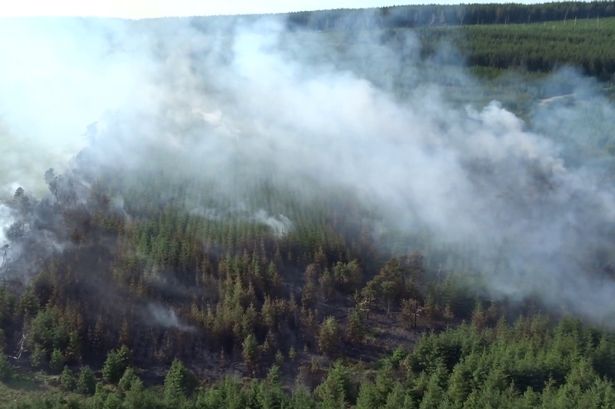