Tribute paid to motorcyclist who died in collision in Cockerham 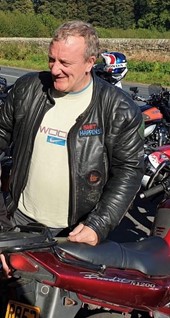 The family of a man who died in a motorbike accident in Cockerham have paid tribute to him.

We were called at around 4pm on Saturday, May 30th, to reports a Suzuki motorbike travelling along the A588 had left the road and come to rest in a field.

The rider, who has since been named as Paul Philip Hardcastle (pictured), sadly died at the scene.

His family, who are now being supported by specially-trained officers, have said: “On Saturday 30th May Paul Philip Hardcastle passed away after a motorbike accident.

“Paul was a loving father of six children and loving grandfather.

“He leaves behind a loving father, sister and brother, six children and seven grandchildren and many other family members.

“To many known as “SPUD” he loved to be out on his bike spending time with his friends who will all deeply miss him.

“Paul worked at Blackpool Transport for many years and leaves many friends and colleagues.

“He lived for his children and his love of bikes. One of his mottos was ‘sh*t happens’.

“He will be deeply missed.”

Sgt Paul Maguire, of Lancashire Constabulary’s Tac Ops team, said: “First and foremost our thoughts are with Paul’s family and friends at this truly awful time. We send them our deepest condolences.

“We continue to appeal for anyone who witnessed the collision and has not yet spoken to police, or anyone who may have dashcam footage, to come forward and contact us.

49 major roads in Lancashire that are closed as lockdown eases