Firefighters busy tackling major incidents in Lancashire were called to tackle a suspected arson at a wood in Lostock Hall.

Crews were called to Old Tram Road, near the reservoir, at 4.20pm yesterday (June 1) after a viewing platform overlooking the duck pond was set alight.

Officers believe a fire accelerant was poured onto an interpretation board at the platform before spreading to the wooden decking.

Pictures from the scene show thick black smoke rising from the area and can be seen from nearby houses.

No injuries were reported, however a wildlife shelter and birdhouse were destroyed in the blaze.

A fire service spokesman said: “One fire engine from Chorley was called at 4.20pm and they used one hose reel to extinguish the fire.”

The incident happened just hours after footage emerged of someone deliberately starting a fire on a patch of grass at Worden Park in Leyland.

It is being investigated by Lancashire Police.

Firefighters were also tackling the blaze involving a tree plantation near Dutton, Preston, after being called at around 2pm on Sunday (May 31).

Crews were also continuing to battle a huge moorland fire in Darwen. 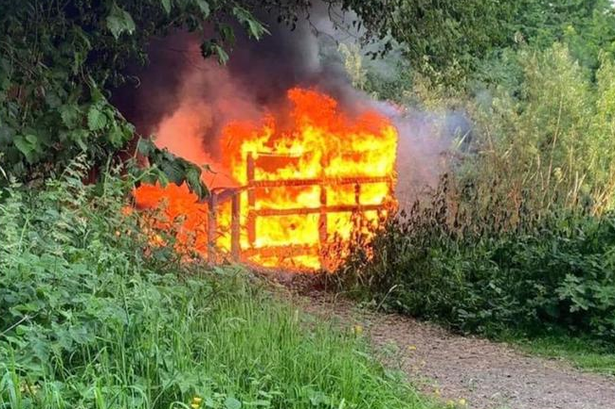 Man wanted by police after two women assaulted with hammer