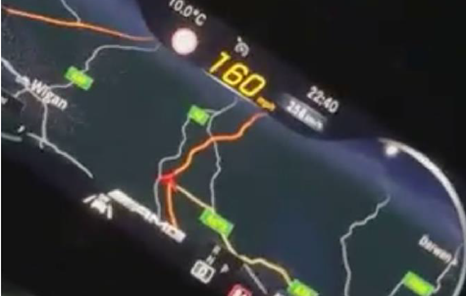 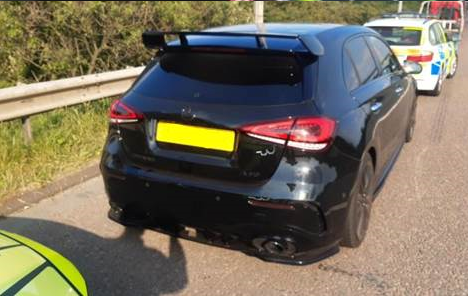 Officers have seized a vehicle after the owner uploaded a 160mph speeding video onto Facebook.

The Mercedes A35 AMG was reported to have been driving at 103mph in a residential area of Bacup and at speeds of up to 160pmh on the M61.

The video, showing the speedometer (pictured) was posted on Facebook in May and reported to police.

The vehicle, registered to a 21-year-old man from Whitworth, had been modified with a body kit and exhaust system, which, police have discovered, has not been declared to the insurance provider.

Earlier this week the Mercedes activated the automated number plate recognition technology while being driven along the M61 heading out of the Blackpool area.

Officers investigating intercepted the car and it was seized under the Road Traffic Act, and has since been repossessed.

Further enquires are ongoing relating to the speeding offences.

PC David Benson of Lancashire Police said: “The registered keeper of the Mercedes has lost his vehicle and his bragging rights. We are now looking into the ludicrous speeds achieved, but, in the meantime, a very powerful car has been taken off the public roads and, in all probability, saved lives.”

Anyone with information on the incidents is asked to contact 101 or email [email protected] quoting log number 1635 of May 11th.