Woman left disabled after sneezing thanks stranger for message of hope

A former Preston student, who was left disabled after sneezing, has described her elation after being sent a message of hope from a stranger during lockdown.

Jess Hopwood, who is currently staying at Derby Lodge, commented on a blog post about sending pick-me-ups to care homes after spending weeks stuck inside.

The 22-year-old who lived in St Helens before moving to Preston, developed a life changing disability two years ago in unusual circumstances.

Whilst studying at Uclan and working at Primark, she sneezed due to her hayfever and ended up prolapsing one of the discs in her spine.

It resulted in an eight-month hospital stay, where she spent time at a rehab centre, and was diagnosed with functional neurological disorder – meaning she can no longer use either of her legs or her left arm.

“My care home wasn’t on the list so I commented asking if it could be added as there are high-risk people here with disabilities during the lockdown,” she told LancsLive.

“I got a letter in the post, and I opened it and thought ‘oh my god, is this actually for me?’”

The gift included a handmade knitted rainbow, and a card from someone called Becky Benton, which read: “The current crisis is difficult for everyone but I imagine even more so for yourself – I just wanted to let you know that I am thinking of you.”

It continued: “I hope you are staying safe and staying strong – remember, at the end of every storm comes a rainbow”.

FND, which Jess suffers from, is a condition that means the brain can’t communicate with the central nervous system effectively, meaning even if you want to move, the signal can’t get to your muscles to do it.

Despite her circumstances, she still manages to make light of the peculiar story behind how it all happened.

“Every time I get patient transport they ask me ‘are you the girl that sneezed’,” she joked.

“It is quite a funny story.”

Now, Jess wants to say thank you to the kind stranger who ‘really lifted’ her spirits.

“Just to have a little something from someone is really nice, so I thought I’d put the word out there to say thank you,” she told LancsLive.

“It was completely out of the blue. I wasn’t expecting anything.

“So I would just like to say thank you from the bottom of my heart because it really lifted my spirits as I have been struggling.

“It’s made things so much better and I would like to thank her for her generosity and her time for making the card and rainbow as it looks like she’s crocheted it herself.”

Jess, who is the youngest resident of the care home, has been stuck inside for almost three months due to the lockdown.

“It’s been very tough, it’s been very challenging, my family live in St Helen’s which is such a distance away, my best friend from uni has had to go back to Leicester and I didn’t even get a chance to say bye to her.”

“Apart from my friends, it was the first time I’ve had a pick me up – so I’d just like to say thank you.” 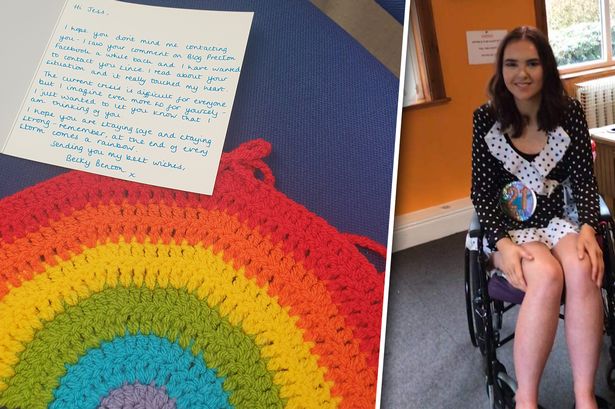 Coronavirus figures for every area in Lancashire on Monday, June 8