These are the some of the worst criminals who have been locked up in Lancashire so far in June.

They have been jailed in the last two weeks for a wide variety of serious offences committed in and around the region.

These include manslaughter, arson, historic sex offences and large-scale Class A drugs supply.

Every one of the people named here has appeared in court.

In some cases, trials have been held, in others the criminals have admitted their guilt.

But in all cases a judge has decided their crimes are so serious only a custodial sentence will suffice.

The below list includes the names, faces and stories of every single one.

Join our Lancashire Court News Facebook group for the latest from the courts.

A Lancashire drugs gang have been jailed for nearly 20 years for their role in a £250,000 drugs conspiracy.

The conspiracy was carried out between November 2018 and May 2019, a court heard.

All five defendants pleaded guilty at Preston Crown Court to conspiracy to supply heroin and crack cocaine and were sentenced by Judge Simon Medland QC.

Walker, 29, of Milnshaw Lane, Accrington, also admitted three offences of burglary and jailed for a total of four years.

Fisher, 21, of James Avenue, Great Harwood, was jailed for 42 months

Edwards, 23, of Dickens Road, Chorley, and Coulburn, 25, of Dale Street, Bacup, were both jailed for four years.

Winter, 29, of Thurston, Skelmersdale, also pleaded guilty to smuggling drugs into Channings Wood prison in Devon. She was jailed for a total of three years and 10 months.

A 17-year-old boy from Accrington, who cannot be named for legal reasons, was given a three-year youth referral order and 150 hours unpaid work.

Matthew Hefford was jailed for possessing crack cocaine and heroin with intent to supply in Burnley.

Officers from the Targeted Crime Team arrested the 33-year-old on March 5.

Hefford, of Thorn Street, was found with several individual street deals of Class A drugs, cash and two mobile phones.

A search of his home address also uncovered more drugs hidden in a cereal box.

He pleaded guilty to the charges at Preston Crown Court and was this week sentenced to 32 months in prison.

Mohammed Jamil Khan was also jailed for possession of numerous wraps of crack cocaine and heroin with intent to supply.

The 25-year-old, of Windermere Avenue, Blackburn, was stopped on Preston New Road by the Targeted Crime Team on April 23.

They found him in possession of Class A drugs and a mobile phone.

He was arrested and later charged with possession with intent to supply crack cocaine and heroin.

Khan pleaded guilty at his first opportunity at Preston Crown Court and was this week sentenced to 28 months in prison.

A paedophile who committed a number of historical sex offences against two girls in Blackpool ‘to satisfy his own depraved sexual desires’ has been jailed for 11 years.

Richard McAdam, of Rixton Grove, Thornton, was arrested in August 2017 after Lancashire Police received a complaint from a victim who alleged she had been raped by the 60-year-old in 2001, when she was 12.

Another victim was identified by police and reported that she had been indecently assaulted as a child by McAdam between 1995 and 2000.

Officers launched an investigation with McAdam denying the offences at court.

McAdam was sentenced at Preston Crown Court and jailed for 11 years.

A man has been jailed for manslaughter and arson after pensioner found dead at the scene of a house fire.

Around 12.05am on July 30 last year a police officer driving on Burnley Road saw a house on fire and an injured man outside.

The fire service attended and found 74-year-old John Hodge dead inside the property.

Police said a 56-year-old man found outside the house was taken to Royal Blackburn Hospital suffering from burns and smoke inhalation. He later recovered from his injuries.

Following initial enquiries, a third man, Salt, was traced and arrested on suspicion of arson with intent to endanger life and murder.

Detectives established he shared the property with the other two men and had told a care worker he was going to set fire to the house.

Salt was later charged with manslaughter and arson being reckless as to endanger life.

He pleaded guilty and was sentenced to 10 years in prison, with a further four years on licence, for Mr Hodge’s manslaughter. The sentence for arson will run concurrently.

A dad-of-two was found slumped at the wheel with hundreds of pounds worth of Class A drugs.

Shaun Esterhuizen, of Promenade in Southport, was found with cocaine, heroin and £150 cash when police spotted him asleep in his car.

Liverpool Crown Court heard  that the 40-year-old began dealing to fund his own drug habit as his life hit a “downward spiral”.

Prosecuting, Charlotte Atherton said: “Police found the defendant asleep in his car on a residential street with the engine running.

“He was obviously under the influence of drugs.

“When he stepped out of the car, officers noticed he was hiding something in his left hand.”

Searches of Esterhuizen and his car uncovered 25 wraps of cocaine worth approximately £245, as well as loose cocaine powder and crack cocaine stones.

A phone was also found inside the car and was found to have messages linked to the purchase and supply of drugs.

One message contained a photo of drugs, weighing scales and other related equipment and read: “Started up here in business. Just doing some weighing and bagging. I’m gonna stay here for a while.”

Ms Atherton described the South Africa-born man as a street dealer and a drug user.

Esterhuizen pleaded guilty to possession of heroin and cocaine with intent to supply and was sentenced to 27 months.

A thug out on licence for plunging a knife into a man’s back was caught stashing 22 wraps of cannabis in his underwear.

Thomas Rigby, from Southport, was handed an eight year prison term in 2014 and was automatically released at the half way point under licence conditions.

But on 21 January 2019, police investigating a car chase burst into a property in Southport and found Rigby in bed.

Liverpool Crown Court heard Rigby, 26, had been found with a total of 25 wraps of cannabis, snap bags and weighing scales – but claimed the drugs were for his own personal consumption.

However after a trial at Liverpool Magistrates’ Court he was found guilty of possession with intent to supply and committed to the crown court for sentence, although he was cleared of assaulting a police officer.

The court heard Rigby had been recalled to prison on licence with a release date in August 2022.

Judge Brian Cummings, QC, sentenced Rigby to 18 months in prison, and the court heard Rigby would be unable to apply for early parole until the half way point of his new sentence.

A stranger “intimately kissed” a 12-year-old girl in McDonals’s before taking her to a hostel and molesting her.

Darren Jones-Bond, 33, from Southport, spotted the child sitting alone on a bench near St John’s Precinct, in Liverpool city centre.

He took her to the restaurant, then to a room where he gave her alcohol, forced her onto a bed before subjecting her to abuse.

However, an Uber delivery driver – who initially thought the girl must be Jones-Bond’s daughter – overheard the pervert in McDonald’s.

Police were alerted and attended the hostel, where they found the girl on a bed, with her top on back to front and trousers unzipped.

Aggressive Jones-Bond was arrested but brazenly claimed the girl had told him she was 24, Liverpool Crown Court heard.

The twisted father, of Leyland Road, – who has a daughter of his own – targeted his victim on Tuesday, February 11 this year.

The Uber driver saw the girl walk up to him at the restaurant in Blundell Street, in the Baltic Triangle, at around 11.30pm. 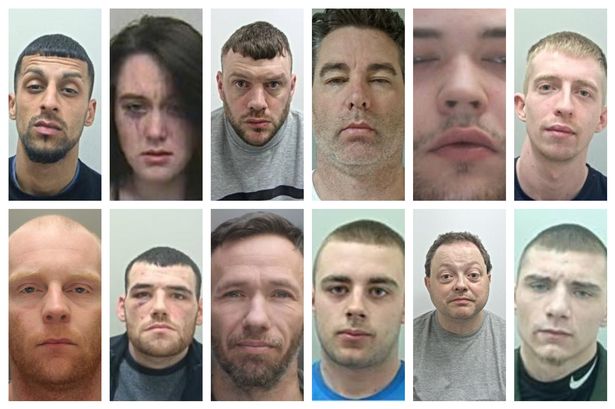 Coronavirus figures for every area in Lancashire on Saturday, June 13