Two thunderstorm warnings have been issued for Lancashire, making it four in just the last four days.

The Met Office has issued two yellow weather warnings for thunderstorms for the whole of the county, including Preston, Lancaster, Blackpool, Burnley, and Blackburn.

The first warning is in place from 1.30pm this afternoon (June 16) and will last until 6am tomorrow (June 17).

The second goes live at midday tomorrow and will last until 9pm.

Towns and villages could be cut off due to flood water.

What to expect during the thunderstorm warnings

A spokesperson for the Met Office said: “Slow-moving heavy showers and thunderstorms will break out across many parts of the UK on Tuesday afternoon. Some places will miss them, but where they do occur they will bring torrential downpours with 25 to 35 mm rain falling in an hour and perhaps 40 to 50 mm in 2 to 3 hours in one or two places. Lightning and hail will be additional hazards.

“These showers and thunderstorms will only slowly die out through the evening, but may persist across northwest England, southwest Scotland and perhaps eastern Northern Ireland into the early hours of Wednesday morning.”

Yesterday Lancashire experienced thunder, lightning and heavy rain with a Met Office weather warning for thunderstorms in place from 1pm until 9pm.

Prior to the Met Office’s fresh warnings, LancsLive reported earlier this morning that Preston, Burnley, Lancaster, and Blackburn were going to experience further thunderstorms.

Blackpool looked like it was going to miss out on the torrential weather, but that has quickly changed. 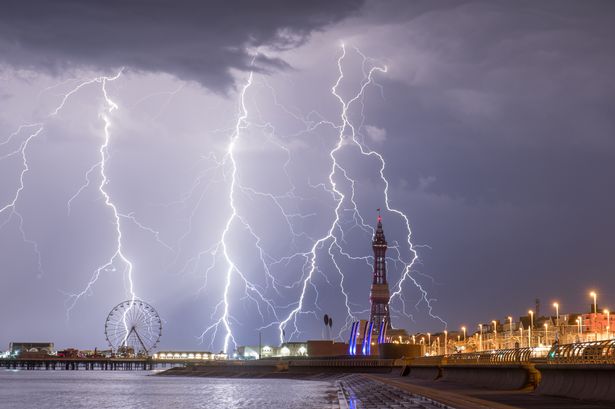 Supercars in Lancaster as Top Gear films across Lancashire