Drugs and prostitution: The area of Preston crying out for help

The Plungington community is now speaking out about the terrifying incidents its residents have been subjected to over the last few months.

Residents have recalled a number of issues involving drug abuse, prostitution, cuckooing (where drug dealers take over a vacated property) and anti-social behaviour that have occurred in the area during lockdown.

The community members claim they are aware of six drug dens, three prostitution brothels and two properties where cuckooing is taking place.

Councillor Pav Akhtar, who represents Plungington at Preston City Council, has previously expressed his frustrations at the ongoing problems and urged police to take action following serious concerns from local residents who fear for their safety.

Now, residents feel forced to take matters into their own hands as they are desperate for more serious action to be taken by Lancashire Police.

A young mum, who does not wish to be named, has expressed her fear for bringing her children up in an area where she feels is no longer safe.

“The drug problems have been getting worse during lockdown,” she said.

“I live right near a house with a known drug dealer living upstairs and a prostitute living downstairs.

“They know that I know about them and that I’ve reported them, so they put my window through.

“I don’t want my kids growing up in an area where heroin is as easily accessible as alcohol is.”

The young mum, who used to work for a local food bank, has previously tried to help the woman, who is a known prostitute, by supplying her food.

However the woman instead took advantage of her kindness and stole from her son’s memorial, who passed away last year.

“She came into the garden and took all the ornaments and his photographs, literally everything. It absolutely devastated us,” she said.

“I found out it was her and I managed to get back one of the ornaments, the other she’d exchanged for drugs.

“A week later the same woman got somebody to distract me at the cash point before stealing my money from the machine.

“I knew it was her because she was caught on CCTV.”

During lockdown, the young mum says she has contacted police over 18 times to report similar incidents, but has not received any follow up calls or visits.

“Me and my sister have both been threatened twice, once with a knife and once with a machete,” she said.

“We’re harassed for money consistently. I’ve told them if you’re desperate for food I’ll feed you but I won’t give money for drugs or cigarettes, but they won’t respect that.

“A 74-year-old lady was chased from the post office last week for money, she was absolutely shaken up.

“It’s the elderly residents that I’m concerned about.”

The young mum also said that she is aware of an elderly man’s property that has allegedly been taken over by drug dealers, also known as cuckooing.

She said: “There is one resident in particular who we are all very concerned about.

“We know his home has been taken over by a relative, who is a drug dealer, whilst he is still living there.

“The man’s health and the way he looks has deteriorated severely throughout lockdown.

“I’ve been reporting this to police and social services for four or five weeks now, and so have his neighbours, yet nobody has been to check up on him.

“It’s more than heartbreaking to see and think that he’s in danger.”

Those who have been living in Plungington for the longest time have witnessed the worse case of decline in the area.

Zubair, who has been a resident of the Preston suburb for 40 years, said: “This area was peaceful with a low crime rate when working class families resided here.

“Twenty years ago due to the expansion of the university, a large volume of properties were bought by companies to rent out to students.

“Companies are now renting these properties to ex offenders on rehab programmes and since this change the crime rate and anti social behaviour has rocketed.

“We have gangs on street corners and cyclists roaming around wearing balaclavas. The neighbours are terrified and living in fear.

“The situation is only going to get worse if they continue with this policy.

“There has been a minimum of two stabbing incidents that I have heard of in the last two months.

“We as residents are contemplating moving out of the area but not everybody can afford to.”

Eugene, who has lived in Plungington for over 20 years, has recently witnessed a huge rise in anti-social behaviour.

He said: “I have grown up in the area and over the last couple of years I have seen a massive change. The drug use and drinking is totally out of control.

“I even have CCTV footage of drug use taking place right outside my house, as recently as Saturday morning.

“I have also been in confrontations with some of the users and in one occasion I was even bitten by one of their dogs.

“Another big concern is the 24-hour sale of alcohol from one of our local shops.

“This is encouraging the anti-social behaviour all through the day and night.

“I think I can speak on behalf of my neighbours and a lot of local residents that this isn’t wanted 24 hours a day.”

“People are defecating in the streets, throwing bottles and passing out on the pavement”

Last week Councillor Akhtar spoke to LancsLive over the drug issues, revealing how residents were forced to make warning signs before fixing them onto the door and window of a home they claim is being used as a drug den.

This property has since been closed down and the tenants have been evacuated.

Cllr Akhtar since shared fresh photos of used syringes and pipes in the suburb on Sunday (June 14), with the pipe found next to the children’s play area at Plungington Community Centre.

He said: “As a councillor of Plungington my job is to represent my community and there’s such horrible, ugly stuff happening that I feel it’s my responsibility to speak up.

“I spent three hours with residents in Plungington over the weekend.

“So many residents are telling me ‘I wish I could afford to leave here’. There’s a huge social and emotional toll.

“My family have lived in Plungington for over 40 years and I’ve grown up here, so we’ve seen a massive deterioration in the area.

“We go to these meetings and everyone seems to commend each other on tackling the issues but nothing is really happening to resolve them.

“Residents feeling completely bereft of support from both the police and the council. It’s not just about blaming one authority or another.

“There’s no real strategy on what’s happening or how it’s going to be dealt with.”

Ch Insp Patrick Worden from Preston Police said: “We are aware that some people who live in the Plungington area are experiencing issues with drugs, which we are committed to tackling.

“You can approach an officer, call 101 or report it to us online at doitonline.lancashire.police.uk.

“Please provide as much detail as possible. All information is treated confidentially.”

A statement from Preston City Council on the issue said: “It’s a very real situation that the residents of some areas of the city, in this instance Plungington, have to witness anti-social behaviour and substance misuse on their doorstep. We’re working alongside Lancashire Police on a multi-agency approach to look at a range of solutions to ease the burden of these issues for our residents including a higher Police visibility in the area which has emerged from this dialogue.

“We understand everyone wants to feel safe in your own home, and we want to reassure you that Council officers are dealing with this at the highest level. The need to work together and be coordinated is essential to get the best outcome for everyone.

“We’re grateful for the current increased Police presence in the area and the message this sends that we take this very seriously and want to do all we can.” 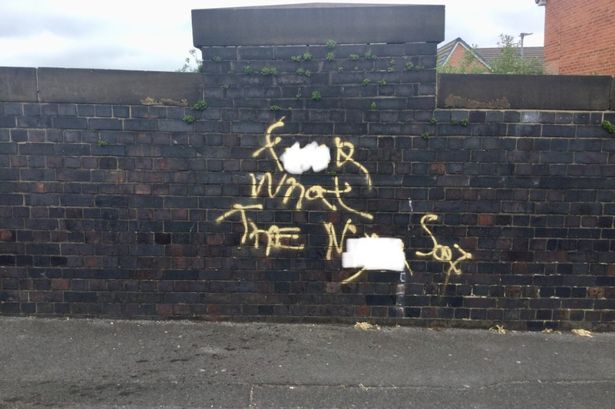