Man taken to hospital with stab wound after assault at park

A man has been taken to hospital with a suspected stab wound after an incident at a park in Preston.

Emergency services were called to Avenham Park shortly after 2pm today (June 17) to reports of an assault.

Pictures sent to LancsLive show several police vehicles and ambulances at the scene and a cordon in place.

Lancashire Police said the victim, believed to be in his 20s, suffering a suspected stab wound to his leg.

He was taken to Royal Preston Hospital for treatment.

Detectives have launched an investigation and enquiries are ongoing.

Lancashire Police Tactical Ops said a drone team and mounted and dog patrols has been deployed to the area to search for two suspects.

A force spokesperson said: “We were called around 2.05pm today (Wednesday, June 17) to a report of an assault in Avenham Park, Preston

“Emergency services attended with a man, believed to be in his 20s, suffering a suspected stab wound to his leg.

“The man has been taken to Royal Preston Hospital for treatment.

“An investigation is underway and enquiries on-going.”

North West Ambulance Service confirmed they were called to the scene at 2.01pm.

They sent an ambulance, a rapid response vehicle and a senior clinician and transported one male to hospital. 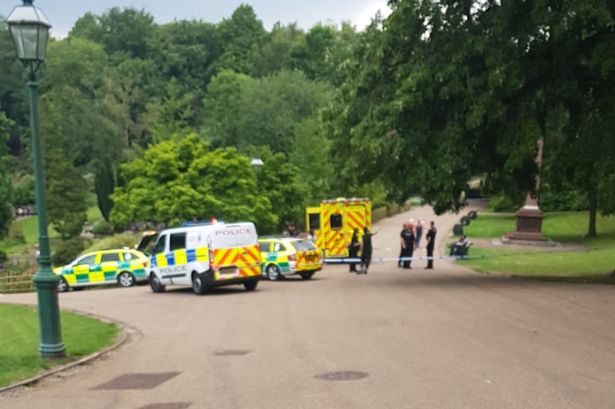