A 19-year-old Lancashire woman is sharing her story with schoolchildren across the country after she was almost paralysed following a vicious knife attack.

Eve Cross has teamed up with 30-year-old Byron Highton who travels the country giving talks to children about the dangers of knife crime.

His presentation, the JJ Effect, is inspired by his brother Jon Jo who was stabbed to death in 2015.

Preston teen Eve is the newest addition to his line up and is hoping to share her experience of being stabbed in the back twice last year, leaving her with a punctured lung and a couple of inch long scars.

Eve told LancsLive: “When I was actually stabbed it just felt like a pressure on my back.

“Then I couldn’t catch my breath, it was like something was squeezing me, it was a horrible feeling.

“The pain came when I got to the hospital and the adrenaline had worn off.

“They had to inject antiseptic into the wounds so they could start sowing them back up, they were quite deep, I was just screaming and screaming.”

The two had fallen out the previous day in what Eve believed was a petty squabble between friends. Little did she know her adversary had other plans.

“I had my earphones in and my head down and I remember seeing some a pair of shows in front of me so I looked up,” said Eve.

“She grabbed me by the hair and slammed me to the wall, I felt these blows against my back and then I couldn’t move.

“I was panicking, I couldn’t see what she had done but I could feel the blood down my back.”

Eve’s attacker, a 16-year-old she had considered as a good friend for six months, had stabbed her twice with a 13cm kitchen knife.

Eve managed to get to her feet and tried walking to the hospital but collapsed. Thankfully her friends found her and called for an ambulance.

“The paramedic told me I was really lucky,” said Eve.

“I could have been left unable to move forever.”

Eve came away from her attack with two inch long scars and a collapsed lung, thankfully she sustained no life altering injuries following the stabbing.

However, although her physical injuries were not long lasting, her mental ones were.

Eve said: “I was left with Post Traumatic Stress Disorder, I couldn’t finish college, I couldn’t do my job.

“I have had to leave numerous jobs, I can’t go out on my own without someone else with me, it’s a constant panic that it will happen again.”

Eve decided to take her story and channel it into something positive by joining Byron at the JJ Effect.

Byron has travelled the country for several years talking about his brother who was stabbed to death in 2015.

The 30-year-old told LancsLive: “A lot of the talk is about the impact of knife, about making better choices, about recognising the signs of those friends who could be taking you down a bad path.

“Knife crime to me is not carrying a knife, that’s just an offence, neither is stabbing someone, knife crime is when that person stops breathing, my brother was stabbed 50 times, when he died his pain stopped.

“But a life time of pain started for my family, that’s what knife crime is.”

Eve and Byron will be sharing pictures and stories from their experiences, hoping to deter kids away from a violent future.

In the talk Eve will even share the blood splattered clothes she was wearing on the night of her attack.

“I see it as fate that I survived,” said Eve.

“It’s all these little factors that mean I’m still here, I was wearing a big coat which meant the blade didn’t go as deep, my friends found me, it’s all luck.

“I think that girl had the intention of killing me but luckily she didn’t.”

Byron and Eve will be doing their first talk on Friday (July 3) in Blackpool.

The duo are working with Lancashire and Manchester police as well as the Crown Prosecution Service and the Prince’s Trust, delivering talks on the effects of knife crime to kids.

They are available for bookings over at the JJ Effect LTD Facebook page.

“It’s about getting in there and making sure the next generation know what the true effects of knife crime are.

“I want to give children the opportunity’s I had: to make the right choices in life.” 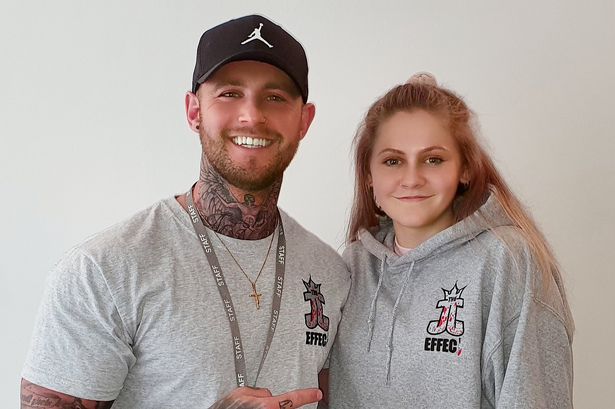