No respect, no morals: Preston nurse ends long shift to car written off

A frontline worker finished her gruelling 12 hour shift only to discover that her BMW had been smashed into.

Nazia Hussain, who works as a nurse at Royal Preston Hospital, clocked off from another day long shift on the Accident and Emergency ward on Friday (June 26) ready to make her way home.

She returned to the hospital’s staff car park and was devastated to find her white BMW looking as though someone had smashed into it and then left the scene.

The front bumper was crushed in, the number plate hanging off, and it had been shunted back into the barrier behind, the metal biting into the car boot.

“I was just shocked beyond belief that this happened in a staff car park,” Nazia told LancsLive.

“I was just so shocked and angry, especially because it could have potentially been caused by a colleague who didn’t own up to it.

“I was appalled, I can’t even truly express how I felt, I was speechless.

“I had just finished a very stressful and challenging shift, I’m a frontline worker, I do my utmost best whenever I go into the hospital.

“To find my car in this state is just disrespectful and disgusting, there are no morals shown here.”

Nazia says that her BMW One series, which she has had for the past three years, is now with a garage who are assessing the damage.

She is not holding out much hope for the car which likely to be a complete write off.

The nurse says things would have been better had the culprits simply owned up to what they had done.

She said: “It is a staff car park, but because of parking eye uplifting the charges during the pandemic, this has allowed members of the public and contractors to park there also.

“This has made it more difficult to identify who has caused the damage.”

The trust CEO, Karen Partington, has told LancsLive that they have introduced extra patrols across the staff car park to ensure that incidents of vandalism are kept under control.

She said: “Most people who use our car parks do so responsibly so we were very disappointed to hear about this incident in which one of our nurses had just finished a long shift caring for our patients only to find out their car had been damaged.

“We have been working with our colleague and the police to try to ascertain what happened but it appears that someone may have driven away following a collision.

“We do everything we can to make our car parks as safe and secure as possible and have been awarded the ‘park mark’ safer parking award for more than ten years but unfortunately this incident took place in an area which isn’t fully covered by our CCTV cameras so we are unable to get hold of video footage.

“We have introduced extra patrols across the site and we will continue to work hard to ensure that incidents of vandalism are kept to a minimum on our car parks.

“Any driver who damages another car has a legal as well as a moral responsibility to inform the owner of the vehicle and leave their contact details so if anyone has any information about this incident we would encourage them to contact the police.”

Lancashire Constabulary are currently investigating the incident and are appealing for witnesses. 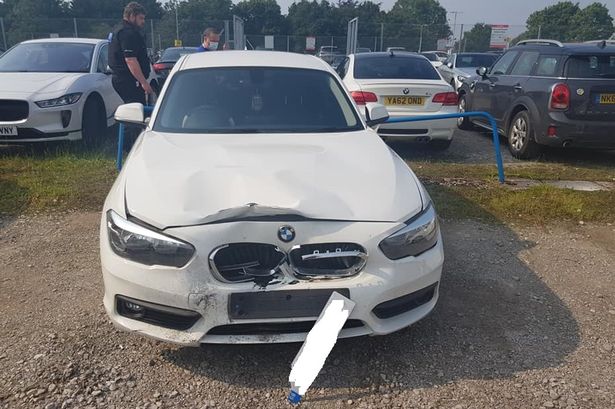