Wigan Athletic fans have taken to protesting outside the Preston headquarters of the English Football League following the shock news of the club entering administration.

But banners placed on the EFL’s fencing have seemingly been taken down by Prestonians less than a day after being put up.

Latics made the administration announcement on Wednesday (July 1) citing financial woes brought on by the coronavirus pandemic.

The announcement has sent shock waves through English football, with Wigan being the first football club to be seriously hit by the pandemic.

Administrators from Begbies Traynor said the “recent fortunes of the club” had been severely impacted by the Covid-19 pandemic and suspension of the Championship during the first three months of lockdown.

After the announcement, the English Football League (EFL) confirmed that Wigan will be deducted 12 points as a result of the club’s cash woes, putting it at serious risk of relegation to League One.

But Wigan fans have now hit back at the EFL, turning up to its Preston headquarters with banners criticising its decision to allow the recent takeover of the club.

Two banners were placed on the fencing outside the HQ last night (July 2).

One, signed off with Wigan Athletic, said: “Minus 12 points for another EFL error.”

Another, signed off with Wigan Athletic, Bolton Wanderers, and Bury FC, said: “Don’t punish the fans for the owners mistakes.”

But as of this morning, the banners were seemingly taken down by members of the Preston public with they put in the boot of a car.

Taking to Twitter, Ryan Crewe said: “None of that bullsh*t in Preston ya c*nts.”

Speaking to LancsLive, an EFL spokesperson said: “Obviously, fans have a right to protest outside.

“We completely understand it’s challenging and the concerns fans have.

“The EFL is willing to engage with them.”

Up until November 2018, the club was owned by Dave Whelan who then sold it to Hong Kong based International Entertainment Corporation (IEC) for £15.9m.

But as of July, new director of the club Au Yeung Wai Kay announced no more money would be invested and the football club was to be placed into administration.

After the announcement on Wednesday, fans gathered outside the DW Stadium in disbelief.

The EFL told LancsLive it continues to engage with the administrators who are leading on the current situation to try and find a new buyer for Wigan Athletic.

“It means everything to me.

“I went to watch them in the FA Cup Final and that was the best day of my life.”

He added: “I would lose everything if they went under.”

Latics fan Ryan Ingram, who also works for the club, said: “I’m devastated. I didn’t see this coming at all. This club has been my life for over 20 years.” 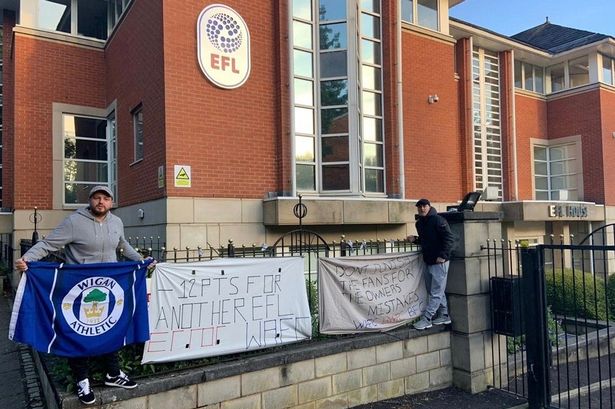