After weeks of stalling their wedding plans due to the lockdown a Burnley couple have finally tied the knot.

Diana Iancu, 22, and her husband, 29-year-old Andrei Iancu, were one of the first couples in Lancashire to get married as lockdown measures were relaxed on Saturday (July 4).

The couple, who have been together since 2015, had planned to get married in April but obviously had to cancel their plans after the coronavirus struck.

Bride Diana told LancsLive that this was a devastating blow.

“I wanted to do this wedding on April 25 but obviously with the virus we had a problem,” said the 22-year-old.

“We couldn’t do anything, everything was closed. I didn’t feel very good about that, I was very sad, I remember that I started crying.

“This event was very important for us.”

Diana and Andrei had to forgo their special day and wait things out in lockdown just like the rest of the country.

But, fortunately, things changed in July when Prime Minister Boris Johnson announced that non-essential businesses like theatres, pubs, cafes and more could reopen from Saturday (July 4).

Diana said: “As soon as I saw this I called the church and asked when it would be possible to do the wedding.

“They said it could happen on July 4.

“We could only have five people in the church, it was just me, my husband, my second child, the priest and two friends to witness the wedding.”

Andrei and Diana tied the knot at at the Romanian Orthodox Church on Harewood Road, Preston.

The couple then returned to their Burnley home before enjoying a small party with their friends.

Diana says it wasn’t important that only five of them were allowed in the church, it only mattered that her and Andrei were finally married.

“It was such an important day for me and my family,” said the new bride.

Johnathan Monaghan, 47, and his wife Simona Monaghan, 39, were there to witness Andrei and Diana’s wedding.

The couple have been friends with the Iancus for some time and were thrilled to see them joined in holy matrimony.

“They have been looking forward to this since the start of the year,” John told LancsLive.

“It was only in the last two weeks that Boris Johnson said we would be able to have weddings so it was a rush to get things organised.

“But it was really nice to finally see them get married.”

But for John and Simona the wedding was significant in more ways than one.

John said: “Me and my wife were actually the first people to get married in that church six years ago and now we were there for the first marriage out of lockdown.

John and Simona were also asked to be godparents to Andrei and Diana’s five month old child at the ceremony.

For everyone involved, it was a special day all round.

“We are just so pleased that they asked us,” said John. 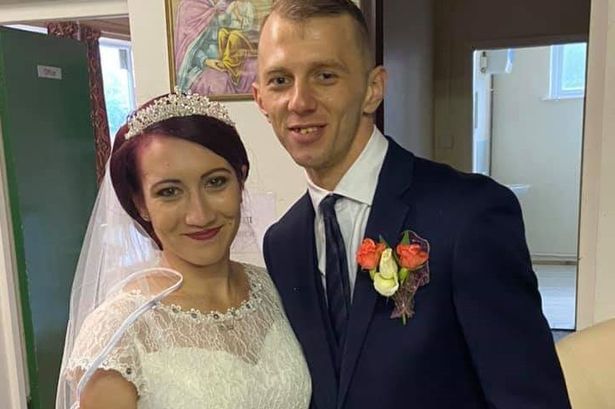 The Lancs countryside home with a ‘secret chapel’ for sale at £1.2m