Kate Garraway had been lauded by her friend Lorraine Kelly for never complaining during her torrid ordeal with her husband’s illness.

The 53-year-old endured a “lonely, miserable voyage” as her husband Derek Draper battled coronavirus but “never complained”, according to Lorraine Kelly.

The Good Morning Britain star, stepped away from her role on the ITV news show after her husband was hospitalised due to COVID-19 back in March.

He was admitted to intensive care and placed in a coma as he battled the virus.

Doctors have since confirmed he’s now free of the bug, but the disease has wreaked havoc on his body.

Kate is now returning to work on GMB as she tries to get back to a normal routine, and she’s been praised for her resilience by her longtime friend Lorraine.

In her column for a national title, Lorraine wrote: “She has been coping with the unimaginable pain and distress of her husband Derek battling for his life after contracting COVID-19.

“Kate has never once complained or asked: ‘Why me?’

“She has simply ­soldiered on, reassuring and raising her children, praising the NHS and helping others in the same boat.

“At times it has been a lonely, ­miserable, tough voyage through uncharted waters. But Kate steered a stoic and steady course throughout.”

Lorraine went on to say Kate had supposed to have been enjoying the time of her life after her success in I’m A Celebrity and her plans to renew her wedding vows with Derek.

However, she has instead been “going through hell”.

The Scottish telly veteran praised Kate for never giving up hope and for staying focused on a future in which Derek returns home.

She’s due to return to Good Morning Britain on Monday in a bid to give a sense of normality to her kids Darcey, 14, and 11-year-old Billy.

Doctors have tried to bring Derek out of the induced coma, he remains unconscious.

Kate has been unable to see her husband since he was admitted to hospital, but has been trying to talk to him and play him music over the phone in the hope he can hear her.

She recently opened up about her husband’s fight for life, admitting she doesn’t know if he’ll ever fully recover.

Speaking on Good Morning Britain, Kate said: “The fight with the virus has been won and he’s still here but it’s wreaked extraordinary damage on his body and we don’t know if he can recover from that…

“He’s still with us and has fought the most extraordinary battle.

“The fact that he is still here, I am so grateful.

“He is very, very sick and as time goes on, it’s a virus and as doctors manage one but extraordinarily well and there seems to be a flicker of hope.” 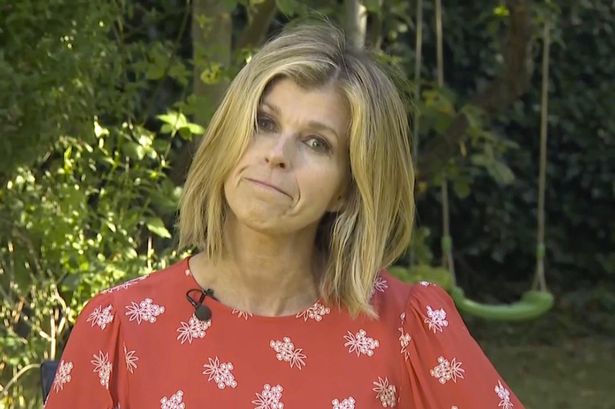