A Preston man has uncovered an unlikely note hidden beneath the floorboard in his home.

Owain Rogers stumbled across the letter whilst renovating his bedroom at his home in Meanygate along with some old marbles.

The note was written by ‘Sister Mary’ and addressed to a ‘Mrs Margaret Philipson’ inviting her to attend a reunion after she had been ‘helping care for the young children’.

After discovering the letter, Owain posted an image of it on Facebook to see whether there was anybody who knew either of the women mentioned in the letter.

Since sharing his post, a brother and sister have come forward to say the note was addressed to their grandmother, who has since passed away.

Speaking of his discovery, Mr Rogers said: “I was carrying out renovations to our bedroom as it’s recently been re-plastered and I needed to check under the floor boards to inspect the existing plumbing.

“Upon removing the floor boards, I notice a small cut out of paper which at first I thought was rubbish but after picking it up to move aside I noticed it was holding contents which turned out to be children’s glass marbles.

“I then realised the piece of paper was in fact a note so I thought it was worth a shot of trying to track down as much information as possible considering the note contained names.

“You hear about treasure being found hidden in old houses and although this has no financial value it’s still priceless for something that’s so small and vague but yet holds so much history and connections to people.”

The note read ‘Dear Margaret, since you have been helping in caring for the young children, I think you might want to come along to our little reunion. You are welcome to come if you can manage it at 2pm today. Sister Mary.’

After posting a picture of the letter on Facebook, Amy Philipson saw the post and notified Owain that Margaret was her grandma, who has since passed away.

Amy, Margaret’s granddaughter, responded: “It’s mine and James Philipson’s grandma. She died 16 years ago and was not well for a few years before and was in a home.

“Any chance we could have the letter to show the family, I’m sure they will be amazed.”

Owain has now arranged to personally hand over the letter to Margaret’s family and is intrigued to hopefully find out more his home’s history.

“I’m waiting for information from the brother and sister that have confirmed that the note was addressed to their grandmother,” he said.

“I would like to find out in what way she cared for the children and around what time bracket and how close did she work with the local church at the top of my street in regards to Sister Mary.

“I’ll be visiting one of the grandchildren this evening to pass the letter over to the family.” 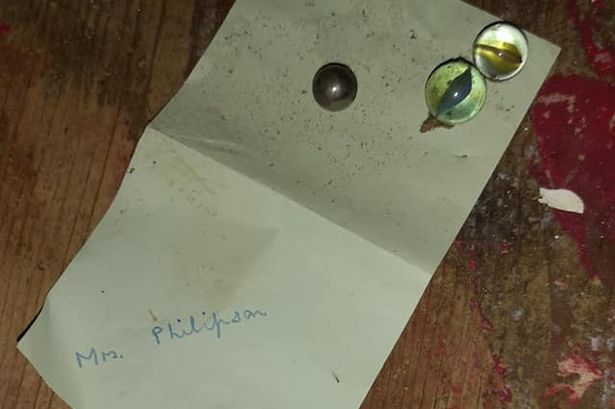