An international drugs gang operating in Lancashire and the north of England used a blizzard of bogus companies to import cocaine and heroin worth millions of pounds hidden in consignments of fruit and vegetables from Holland, a jury heard.

The authorities found drugs with a street value of £40m when they intercepted four consignments destined for the north of England but investigators believe this was ‘the tip of the iceberg’ and that the alleged conspirators were behind more than 200 shipments, a jury was told.

The drugs were hidden in pallets of vegetables, herbs and fruit juice ‘shipped under the cover of bogus import-export businesses’ using ‘fronts’ trading under names such as ‘Blackpool Fruit and Veg’.

Some were sent to warehouses in Preston, prosecutors said.

It is alleged a company director from Widnes, Paul Green, 55, led the sophisticated operation and enjoyed holidays to Portugal, expensive cars and designer gear, the MEN reports.

Andrew Thomas QC, opening the case for the Crown at Manchester Crown Court on Tuesday, told the jury the case concerned the importation of ‘vast quantities’ of drugs from continental Europe into the UK.

A firm called Pot Fresh, a name stolen from a legitimate company, began importing veg from Holland in September 2016 but one of the consignments, placed on pallets and shrink-wrapped, was handed to a Dutch haulier ready to be shipped to the UK, the court was told.

The goods were handed over by an Englishman who spoke fluent Dutch but the truck driver became suspicious and returned his cargo back to the depot where eight kilos of cocaine with a street value of almost £1m was found hidden in boxes of ginger, according to the prosecutor.

A month later Dutch police stopped a van in Amstelveen and found more drugs worth £1.7m, the jurors heard.

The firm was said to have operated more than 170 trips, two or three each week.

The Crown say none were intercepted by the authorities but police interrogation of phone records showed each delivery contained drugs.

The alleged drugs importation operation was abandoned following a number of arrests in March 2018, the court was told.

But within weeks another firm called ‘Europroduce’ began sending fruit and veg from Holland to warehouses in Sheffield and Preston, according to the prosecution.

But the court was told one Europroduce consignment was intercepted at the Lincolnshire port of Killingholme on September 4, 2018, and investigators found 336 kilos of cocaine and 57 kilos of heroine with a street value estimated at £27m.

Investigators again looked at phone messages which suggested there had been drugs in earlier consignments too, according to the prosecution.

More loads were intercepted, one at the port of Immingham in Lincolnshire where the authorities uncovered 20 kilos of heroin, 15 kilos of cocaine and 250 kilos of cannabis.

In all investigators seized 450 kilos of heroin and cocaine and more than two tonnes of cannabis worth £40m in four intercepted loads, according to the Crown.

“Those were only the loads which were intercepted. That was the tip of an exceptionally large iceberg,” said the QC.

Investigations on both sides of the North Sea found the alleged conspirators were responsible for more than 200 shipments, the jurors were told.

The QC said the value of the drugs said to be on those 200 shipments ‘must have been enormous’.

The prosecutor told the jurors the series of business names was intended by the alleged conspirators to be ‘confusing’ because they were were ‘fronts’ and a ‘cover-up’ for the drugs supply operation said to have been led by Paul Green, 55, from Widnes.

The jurors were told ‘he gave the outward impression’ he was a successful company director who lived in a detached home with his wife and step-daughter.

The court heard the family enjoyed holidays to Portugal and a string of nice cars was parked on the drive like an AMG Mercedes and Jaguar F-Pace.

Investigators found luxury goods such as Rolex watches as well as designed labels Gucci and Givenchy at the address, the jurors heard.

Even though Mr Green was a director of a number of companies, including a cleaning and hair-dressing business, most years he declared no salary and little or no profit, according to the prosecution.

Mr Green and seven others on trial deny a string of offences.

Seven of the eight, all the defendants bar Mr McMullen, deny another charge of conspiracy to import cannabis, a Class B drug.

Mr Green and Mr Kewin deny one count of fraud while Mr Kewin and Mr Hussain each deny a charge that they participated in the activities of an organised crime group. 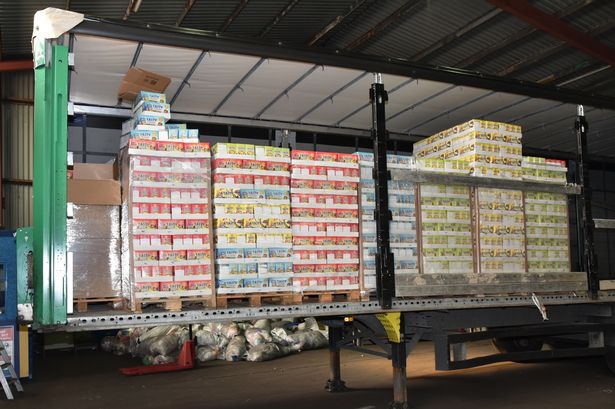