Trio jailed after £3.25million of cannabis found hidden in crates of frozen meat in Oswaldtwistle warehouse

A gang who transported millions of pounds of cannabis from Spain to East Lancashire hidden in crates of frozen meat have been jailed.

On the afternoon of August 26, 2020, police conducting enquiries on Commercial Street, Oswaldtwistle, heard voices coming from a nearby warehouse unit and noticed a “death smell” in the air.

Investigations found that the unit was being rented by the defendants and used as a cover to take delivery of and supply large amounts of cannabis. 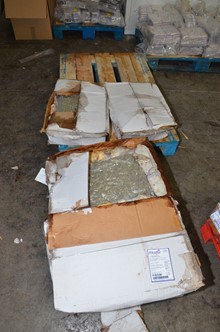 Forensic examinations found DNA on drinks bottles recovered in an office that belonged to Alam and Patel and DNA found inside pink Marigold gloves that were used to clean the packages of cannabis was found to be that of defendant Ismail Ahmed (pictured top centre).

The defendants were also linked to the conspiracy via data recovered from their mobile phones.

CCTV recovered from the area showed that earlier in the morning of August 26, a HGV registered to a haulage company in Spain arrived at the unit. A number of crates were then delivered.

Also that morning, defendant Gary McCann was captured on CCTV moving bins around outside the unit in preparation for the removal of the cannabis from the boxes of meat which were later discarded.

Further examination of documentation showed that there had been eight similar deliveries to the unit from the Spanish haulage company between March 2020 and August 2020 which coincided with the rental of the unit by the defendants.

Following a detailed investigation officers identified those believed to be involved and executed warrants at addresses in Burnley, Blackburn and Nelson.

On November 24 the four defendants pleaded guilty to all charges brought against them and were remanded into custody.

Today at Preston Crown Court, Judge Guy Mathieson sentenced them to the following:

Gary McCann will be sentenced early next year.

A fifth man charged as part of the conspiracy was acquitted.

DCI Tim Brown, from East Division, said: “These conspirators all played their individual roles in what was a sophisticated drugs operation, which saw large quantities of cannabis exported into the UK, repackaged and then sold on. The only thing which motivated these men was greed.

“While not Class A drugs, the sale of cannabis leads to exactly the same type of violence, exploitation and funding of serious and organised crime. It causes misery in communities and leads to vulnerable people being taken advantage of.

“This was a long and complex investigation and a lot of time, hard work and tenacity went into securing these convictions. I am pleased that this organised criminal gang has now been disbanded and its members jailed. I would also like to thank our colleagues from the CPS.

“Lancashire Police will not tolerate illegal drugs activity of any kind and will use all the powers available to us to seek out, arrest and prosecute the offenders.”

To report a crime in your area call 101 or report it online via https://www.lancashire.police.uk/

Relief as Chorley crossing goes up 12 years after homes built

Hoghton £950k family home that comes with its own kennels, cattery and equestrian business