Names of dishes are sometimes better than the meal itself – and prior to eating, it’s something you could level at the menu one new eatery in Preston.

At Loaded in the city centre, everything is named after your favourite shows, films and even celebrities. You could grab a little Egg Sheeran, or an Angry Birds in this little takeaway off the high street.

The store located on Corporation Street blends in with the other small, independent businesses sandwiched closely together. When I walked past it the first time, I barley looked twice.

But that didn’t matter because as soon as I spotted the menu on their Instagram page, I knew I’d likely sit down and eat it anywhere. It’s a fairly new business, barley a fortnight old so I expected the menu to be sparse for . It wasn’t.

Loaded is as it says on the tin – loaded fries, rice or subs with a variety of meat and salad options to pick from.

The menu is varied but simple, choose your base, your topping and the sauces, or pick from the range of predesigned dishes. That’s what I did, having stared wide eyed at the menu for longer than socially acceptable, I still couldn’t pick so I asked the gent behind the counter ‘what’s your most popular dish?’.

Of the dozen crafted dishes, it was Cow and Chicken – named after the popular animated Cartoon Network series of the 90’s. It comes with Mexican chicken, Mexican steak, mixed salad and chives loaded onto a bowl of boiled rice.

With some extra salad, and of course, the ‘special sauce’, I took my takeaway bowl eager to tuck in. This portion is huge.

If, like me, you eat with your eyes do not be disheartened to look down at the bowl and find you’ve barley made a dent after half an hour.. At £6.99 per dish, it’s definitely value for money.

Usually, I find boiled rice to be incredibly bland and tasteless, often ruining meals for me most of the time. The flavours of the sauces, the marinades and the meat seemed to have seeped into the rice so it was punchy and tasty.

If you’re not one for spice, it’s probably wise to make it known when ordering. Even despite me ordering a ‘mild’ version of the Cow and Chicken dish I found it had a pretty big kick to it leaving me with a sniffly nose and in need of multiple gulps of water.

Perhaps this is quite pedantic of me but I always find when pieces of meat and veg are too big to eat in a single mouthful, the meal just becomes a chore to eat. The steak and chicken pieces were perfectly bite sized that didn’t require me to grab a knife, battle with fitting the piece on the fork itself. It actually meant I could quickly eat while getting other jobs done that day.

Chicken and steak are often overcooked in fast food joints and very easily become dry and hard to chew. Even as leftovers the day after, the meat chicken was still succulent and the slices of steak – while rather peppery – went down a treat.

The concept of loaded dishes is not a new one but for almost £7 for a meal that not only tastes amazing but provides you with lunch twice, it’s worth every penny. I’ll certainly be heading back to the takeaway, maybe this time for an Egg Sheeran. 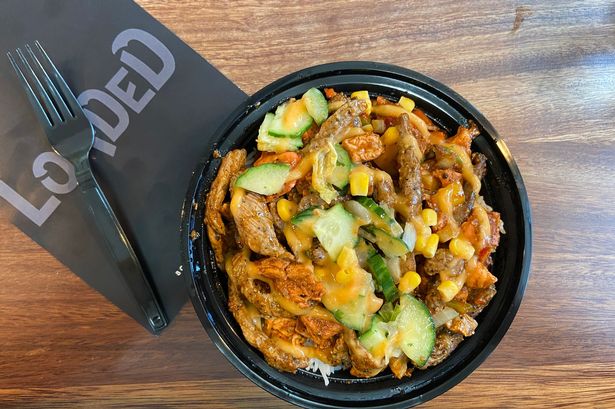