Bakeries have stood the test of time in all communities, surviving and thriving throughout the years.

As the heart of the community, they bring about a sense of collectiveness and joy, two of the things one family owned bakery has done for nearly four decades in Preston. The Bake Away on Longridge Road has been a part of the community for 38 years.

The small, rustic looking building is nestled away on the side of a busy road, quietly unassuming and shrouded by the heavy flow of traffic coming in at all angles. A zebra crossing offers little moments for the passing driver to stop and notice the traditional shopfront but The Bake Away doesn’t need it, they won the hearts of the community the day the premises became theirs back in 1984.

READ MORE: ‘Much better than Blackpool’: The pier that TripAdvisor reviewers say is the best in Lancashire

Life for Lynn Pinder and her family was a different picture back then and as a teenager thinking about a career, Lynn never saw her future in the bakery coming. In the late 80s Lynn’s mother, Maureen worked as a manager of a German firm in Longridge which burnt down leaving employees to decide whether to relocate to the offices in Germany or take redundancy.

Instead of taking her two children to live abroad, Maureen opted for redundancy and began the search for a new job. After struggling to find suitable work, Maureen took the opportunity to do what she had always dreamt of: “owning a confectioner’s baker’s shop”.

Spotting the small shop front on Longridge Road, which at the time was called Forshaw’s, Lynn’s mother sealed the deal on the beginnings of her family bakery. Maureen’s dreams were too big for the cramped store and when the cobblers at the back of the store went up for sale, she snapped that premises up too, making way for a more industrial scale kitchen.

“It turned into a big bakery and I think over the years, at its height, she was working nights and days and we employed up to about 15 people. We were making bread and doing deliveries but now we’re self contained, and there’s only three of us,” Lynn said.

As a teenager, Lynn took on a job at a local dairy factory where she worked Monday to Friday and helped her mum every Saturday since the bakery opened. In 1989 Lynn gave birth to her first child, her son, which meant she soon had to cut back hours at the dairy factory, opening her up to a more flexible working pattern at the family bakery.

“When my eldest son was born in 1989, I started working part time and mum would look after my son and I would work for her as well as during Saturday’s and the hours just got more and more,” she said.

“Now, years on we still just look after the customers round here and we get an awful lot of customers from the industrial estates some from like Perry’s and Volkswagen and down there, and they come out of town as well. It’s a lot of customers and I must admit it’s been really really nice.

“People love this place because of it’s home cooking. My mother-in-law worked for us for a bit after she retired, she was a school cook so made all the old fashioned things, like cornflake slice and Manchester tarts and all the traditional school recipes. I think because we’re not mass produced and everything’s fresh is what makes us a success. All the cakes out at the front have been made in the morning, all the fresh cream cakes and vanilla slices. We have it down to a fine art so doesn’t take us long to fill the shop up in the morning

“All the cakes out at the front have been made in the morning, all the fresh cream cakes and vanilla slices. We have it down to a fine art so doesn’t take us long to fill the shop up each day.

Throughout the decades the business has grown but Lynn says so has the community which has been one of her favourite parts of the job. Serving locals day in, day out, has always put a smile on the baker’s face especially seeing how some of them have changed through the years.

“It’s a good community around here, I love it, I love the people, it’s been great over the last 38 years to see people that have been in pushchairs now come in with their own children and you know we’ve had the odd one that’s been really really naughty – and they bring their own children in now too,” Lynn said.

“I wouldn’t have done it any other way I think because – it might sound a bit corny or whatever- it’s been really nice working in a community and seeing people regularly. There was one guy, Trevor, I used to make his Christmas dinner for him and he’d come in to see us. Because it’s such a small bakery, we can look after them which is really nice.

“It’s really rewarding too, my husband used to joke that one of these days Trevor’s going to be sat around our table. But that’s what you do isn’t it, you look after people because we know everybody.”

Many employers see various members of staff walk in and out of their doors but Lynn’s team have mostly stuck with her from the beginning. Lesley Ryan, 64 has worked at The Bake Away for 36 years and says the reason why she has stayed with Lynn and the team for so long is because of how well they all get on.

“It’s just like a family, I do enjoy my job, I enjoy the customers and the banter that we have, it’s just great. I’ve got three girls and my youngest one was starting school when I saw this job advertised in the window so I thought I’d just go in and apply and see this as a summer job,” Lesley said.

“Lynn’s mother-in-law interviewed me and I got that job and that’s it, the rest is history. I never planned to be here this long, I’d initially planned to stay for the summer, but I love it- you get to know all the customers, we’re all working together just being here, it’s a great community.

“It’s really sad that she’s selling but I realised that it’s something she has to do and nothing was wrong. It’s been really emotional- there’s been few tears shed but we’ll just go from day to day and see what happens.”

After 38 years of running the bakery, Lynn has decided to sell the business in the hopes of spending more time with her husband, her two sons and her mother. But saying goodbye to her shop hasn’t been an easy decision and one that has come as a shock to her family.

“Things are going to come to an end, and my husband retires next year, and my eldest son lives abroad so if I want to go and see him, you know, I can’t run this place so I thought, well, there’s never a good time to put it up for sale but we’ll give it a go and see if it sells and it should do because it’s a good it’s a good business, ” Lynn says.

“I just feel like if I don’t do it now, I’ll still be here when I’m 65 and another 10 years time will pass. I want to spend more time with my mum- I want to spend a bit more quality time rather than rush around all the time.

“My brother put the for sale sign up for me and he came round the other night, he gave me a hug and said are you sure you want to do this? I just said ‘don’t ask, don’t ask’. I’ve found it quite emotional and I’m still not 100% sure I’m doing the right the thing but I think it has to come to an end, eventually I’m going to have to let go and let somebody else that’s younger- maybe even a mum and daughter like me.

“This business has served our family really and for somebody that is looking to have a good life, running a small business in a community, it’s all ready, up and running and does really well. I’ve thoroughly enjoyed it and even though it is really hard work, it’s so rewarding- I wouldn’t have changed a thing.” 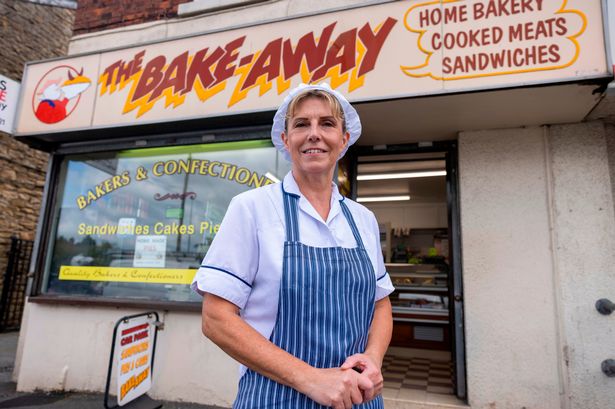